I was skeptical. Powdered ginger mixed in water for a headache? But given the frequency and severity of my headaches since the brain bleeds, I was willing to try anything.
I wasn’t surprised when it did nothing for me.
A Facebook friend suggested that I try candied ginger. Since I love candied ginger anyway, my next headache seemed like the perfect opportunity to try it as a remedy. 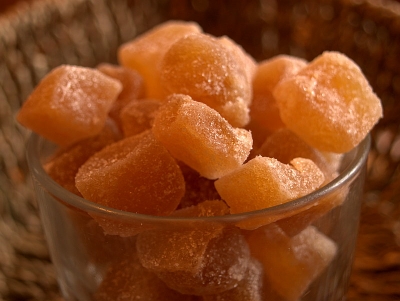 And it worked. Like a charm. Quickly too, almost instantaneously.
Unfortunately, it didn’t last very long. I had to eat another couple of pieces within two hours. Then again two hours later, and again. But it worked.
Had I finally found a cure for my headaches?
A couple of days later, when I next had a headache, once more the ginger took care of it. And a day later it did the same. I started feeling cautiously optimistic. But when it took care of my travel-related headaches on my ten day long trip to Colorado, my optimism knew no bounds.
This was a life changer. I wouldn’t have to struggle to function with headaches big and small. I’d be able to write as much as I wanted to. I wouldn’t have to lose hours, days, confined a darkened room. I’d be able to join in on all the family activities during my upcoming trip.
Daniel and I arrived at my brother’s Friday evening. I had to eat ginger several times during the long drive there. But again, it was effective.
I woke up the next morning with a horrendous headache, worse than any I’ve had since I discovered how well ginger worked. But I wasn’t worried, the ginger would probably work. Wouldn’t it?
It barely touched the headache. Actually, it did nothing. I ate another piece, and another two or three—nothing.
The bloody brain did not give in. I’d really been pushing my bounds and it was time to pay the price, and nothing, neither Aleve, no amount of protein or water, or anything that had ever helped in the past worked. Including ginger.
I had no choice but to yield to the bloody brain. I had to leave my brother’s before supper.
Before leaving for the bed and breakfast, still optimistic, I’d arranged to meet up for an early morning walk on Sunday. To improve my chances of getting rid of the headache, I added a few more pieces of ginger and a couple of Aleve to my evening meds.
I woke up several hours later, the pain even worse, which did not bode well–I knew that even if I felt better by morning, I’d have to bail on the walk. Any exposure to the sun would trigger an even worse headache.
I did feel a bit better Sunday morning. I ate a few pieces of ginger, hoping it’d help make our last few hours with the family bearable.
By the time Daniel and I reached my brother’s house, the sun was high in the sky. The few steps in the sun from the car to his front door increased the pain. However, I was able to function as long as I kept pounding the ginger.
Ginger continues to take care of most my lesser headaches, dramatically improving the quality of my life.