“May I help y—”
I breezed past her. I was in a hurry. I couldn’t be late for my meeting. But it was imperative that I stop in at the yarn store on my way into work.
The woman at the cash register who had tried to greet me, spoke to my back, “You look like a woman with a purpose.” 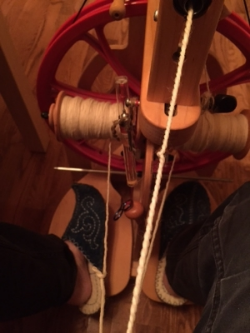 Without stopping, I tossed over my shoulder. “Definitely a purpose.”
And I was—I was out of fiber, and I had a lot more spinning to do. As I strode towards the back of the store I tried to remember which particular wool I needed. Was it Wensleydale, Corriedale, or Blue Faced Leicester?
When I reached the bin with the fiber, I rummaged through it. Definitely not Merino, or superwash. Nope, it wasn’t Wensleydale—too shiny. I needed Corriedale or Blue Faced Leicester. I tried to wrack my brain. Wait. They only had one of each. I checked through the bags again. One. That wouldn’t be enough. I went out to the front of the store for help.
When I returned to the cash register, I had four bags of wool in my arms, two of Corriedale and two of Blue Faced Leicester. I dumped them onto the counter, ready to check out. I smiled apologetically. “Spinzilla.”
She nodded. “Ah. Spinzilla.”
According to the Spinzilla website (http://www.spinzilla.org/): “Spinzilla is a global event where teams and individuals compete in a friendly challenge to see who can spin the most yarn in a week!” I’m a member of Team Schacht. Schacht Spindle Company—a loom and spinning wheel factory (http://schachtspindle.com/).
I spent the weekend prior to Spinzilla rushing around clearing my desk to maximize my spinning time during the following week.
Before I went in to work on Monday, I sat down at my spinning wheel and spun half a bobbin. I couldn’t wait to get back to it when I returned home after work.
Sarah showed up with Gus during the day. No worries, I’d spin while hanging out. After a pleasant dinner, Sarah went out for the evening, leaving Gus behind. No worries, I’d spin while he napped.
Except he didn’t nap.
He was very cute trying to figure out the spinning wheel. He was also cute when he asked me to throw a ball for him—I tossed the ball a few times. He was very cute lying on the floor looking at me reproachfully. And even cuter when he asked to go outside.
I didn’t get much spinning done.
Tuesday was deadly at work. I came home late. I’d managed to get some spinning done before work and a wee bit more before I surrendered to exhaustion. This was not going well. No matter, Wednesday would be better.
Wednesday was worse. I looked at my spinning wheel on my way to bed and walked right past it. No spinning on Wednesday. None. Whatsoever. 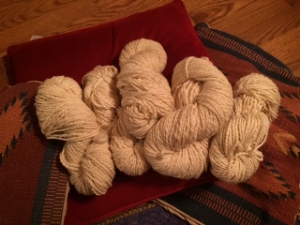 I stayed home on Thursday. I’d get a lot of spinning done. First I’d do some writing, then spinning. I was going to spin a couple of bobbins easily, probably more. No, certainly more. Probably four.

I stopped in at the yarn store on the way to work Friday morning.

At the cash register, trying to make up for my brusqueness on my way to the fiber display, I chit chatted. “Do you have a spinzilla team?” Apparently they did, twenty or twenty five strong. “I’m on Team Schacht.”

Her easy smile slipped from her face. “Well that doesn’t seem fair. They should have something in the rules about not having really advanced spinners…”

I assured her that though they made spinning wheels, most of the Schacht workers were not spinners, and there were quite a few beginners on the team.

I walked out the door shaking my head–some people take Spinzilla a little too seriously. Thank God I wasn’t that obsessed.

I quickly shrugged it off–I didn’t have time for that kind of thing, between work and Spinzilla, I would be far too busy over the weekend. I’d get a lot of spinning done this evening, and if I’m too tired, no worries, I planned to spend most of the weekend spinning. I had to pass the 2,000 yard mark no matter what. If all went well, I should be able to double that.