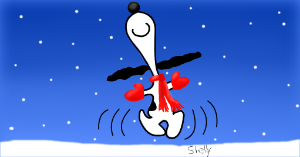 I posted on Facebook: “No headache today! Whoohoo!”
It’s the second day since the semester began, a month and a half ago, that I was headache free. Yes, the day isn’t over yet, but from past experience I know that there’s a decent chance that I will be fine the rest of the day.
As long as I don’t overdo things.
That’s the key. My instinct is to take advantage of the situation and get a lot done. I’m planning on stopping to pick up a prescription, and there’s that package I need to mail. There’s also grocery shopping. It would also be a good idea to change the sheets, and go through some papers, and work on…
But I won’t. I’ll restrict myself to two–I’ll pick up my prescription and stop by the post office. That’s it. Actually, I have some spinning to do as well—it is Spinzilla week, after all. And I’ll also do some writing, of course—I only skip my daily writing when I’m confined to my bed with a really really bad headache.
But I won’t kill myself. Only those four things. And I I’ll take a nap. And I’ll stick to my plan to skip going into the office. Weeks when I don’t take at least one day off end badly, often very badly. I do work on days when I stay at home, but I do it at my own pace, resting as needed.
It’s been a tough week. Weeks when I give exams are always rough. More students stop by to ask questions, often outside regular office hours. And there’s putting together a set of review problems for the students and writing a test and a make-up exam–there are always students who can’t make it to the exam. Then there’s the evening review session and the grading. Test weeks are inflexible and stressful.
On test weeks, I’m more desperate than usual to take my day off. Usually, at this point, the headache has reached an unbearable level, and I have no choice but rest. Yesterday, in the aftermath of attending a long meeting followed the evening, I felt awful. Staying upright was not easy. I thought I would collapse or have a seizure while proctoring the exam. I wondered whether I should warn the students in advance and explain that it was no big deal, no reason to panic. But before the test was over, I started feeling better.
I was sure that today I would pay the price, that the bloody brain would lash out at me for overstepping my bounds. But it didn’t—I don’t have a headache.
Could it be that my new and more sensible strategy is actually paying off significantly?
The semester started badly. The combination of working on a grant proposal, running two TA training workshops, finding undergraduate TAs to fill in the gaps left by too few graduate students TAs, and preparing for the new semester of teaching, was just too much. Much worse than usual. And the bloody brain rebelled in a big way, to the point where it gave off signals symptomatic of a brain bleed.
The experience terrified me, and I came away from it realizing that I absolutely had to slow down. I had to pace myself better. I had to make absolutely sure to keep one day completely clear so that I could stay home. I had to say no, firmly. And I have so far, since the beginning of the semester.
And today, despite the rough week, I am headache free!
Woohoo!