I leaned back. “Honestly, I don’t really care.”
Tom gave me a sharp look. I explained, “I’m working on a headache that’s threatening to be a doozie. My brain is no longer functioning.”
He could talk all he wanted but it would go in one ear and out the other. The bloody brain was done for the day. I’d over-worked it, over-stepped the bounds it had set. So it went on strike. 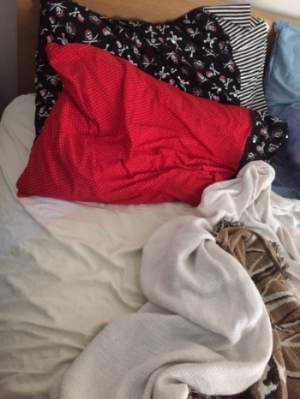 Tom asked, “So you’re saying there really isn’t much point to this meeting. You basically have nothing to contribute.”
I smiled and nodded. “That just about sums it up.” The meeting ended and I made my weary way to my office to get my things and go home, where I collapsed into bed and slept and slept.
There was no point to my being there. I was done. The bloody brain was done.
I’ve come to expect drama from the bloody brain, whenever neuro-fatigue sets in—exacerbated neurological deficits, debilitating headaches, slurred speech, abysmal balance, meltdowns. These are all signs that I’ve over done things and that the bloody brain needs rest, that I need rest.
But just a couple of weeks ago, I noticed and noted the less dramatic symptoms. My thoughts slow down to the point where my mind is blank most of the time.
I can communicate at a very basic level, responding to simple chit chat. But as soon as you try to discuss a topic of any substance, you’ve lost me by the end of the first sentence. You can talk to me all you like, repeat what you said, slow down, break it down, but my mind isn’t registering, not absorbing. My brain is not processing.
Over a period of three weeks before the semester started, I’d kept going for far too long. After a long drive to and from Boston, I had to knuckle down, working on a grant proposal, preparing for class, running TA training workshops, assigning TAs, and living. And the bloody brain rebelled
I kept going because, though exhausted, nothing dramatic happened, nor debilitating headaches, no hypersensitivity to sensory input, no meltdowns. I kept going because everything needed to be done.
But then it was time to meet with Tom to discuss the grant proposal, and nothing registered, my mind was a total blank. It finally clicked—the bloody brain doesn’t always react dramatically when I overdo things. Sometimes it just quits, quietly, without a fuss, incapacitating me in more subtle ways, incapable of holding a conversation, unable to write, to read and send emails.
Before I finally put two and two together, I’d be bewildered. I was doing okay, the brain wasn’t lashing out at me, crippling me with extreme symptoms. Could I not be trying hard enough?
Now I know, one more thing to watch out for, a less obvious warning that it’s time to slow down. But there’s so much to be done.
Go home.
But no one else can take over, they don’t know the ins and outs of what I do.
Rest.
But–
Go to sleep.