A few days ago, I heard a poem written by one who was left behind. Even before I heard the entire poem, the title, “The Other Side of Suicide,” struck a nerve, and felt a piece click into place.
I sort of knew. But not really. The other side was not visible from within the abyss. 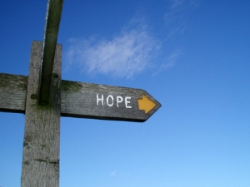 www.flickr.com
That deep black pit held nothing but my viewpoint, my misery and hopelessness, my pain. I felt I had nothing to bring to the world—I was a needy taker, a burden on humanity.
The world would be better off without me.
I didn’t want to die; the thought was terrifying. I had to be strong, I wanted to be strong. My struggle was draining. But I kept fighting, until I felt I had nothing left. I believed there was no choice—the hopelessness was all consuming, a deep dark nightmare that completely obliterated the other side–the pain, suffering, and anger of those left behind no longer existed. Except that even at my worst, I was lucky enough to stumble upon a brief glimmer, something that helped me find my wayout of that pit.
I felt ashamed of my thoughts. And my shame isolated me. I it weren’t for that shame, I probably would have sought help sooner. I would’ve admitted to my suicidal ideation long before I toppled over the edge into the abyss. And maybe I wouldn’t have fallen back into it again and again over the years. Maybe.
I am alive. I have hope. I can’t speak for the future.