Judy said, “Be compassionate towards your inner critic.”
How could I be compassionate towards this entity who tries to prevent me from writing and exploring difficult topics? How could I love someone who makes me procrastinate, who tries to change the subject when I need to focus?
When I write about difficult subjects such as my struggles with suicidal ideation or memories of traumatic experiences, my inner critic finds ways to prevent me from writing. “You’re tired. You could really use a nap.” or “You shouldn’t start working now. You’ll lose track of time and be late for your appointment.” Sometimes it tempts me with other, easier topics to explore, or convinces me that the wash absolutely has to be done, right now.
But my brain often pushes me towards emotionally intense topics. It wants me to go there to face them, to explore and process. I want to write about these tough issues. I feel a deep need to confront my demons.
Exploring my thoughts of suicide helped me deal with the stigma involved. The deep shame I felt at one point has in the past prevented me from speaking of it. By facing the issue, I became able to talk about it, to ask for help.
My inner critic also tells me that I shouldn’t allow my disability to be a burden on others, that I shouldn’t ask for help when I’m in trouble, that I would be making a spectacle of myself, that I’m behaving like a malingerer. 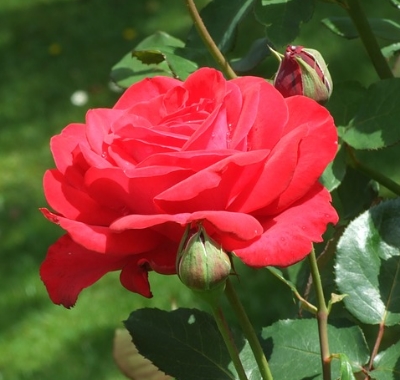 I sometimes feel resentful, as if it is trying to rule my life. On those occasions, I regard its goals to contain me within my comfort zone as a challenge, a dare. Unfortunately, as a consequence, I overstep the bounds that the bloody brain has set for me, leaving me with debilitating headaches, crippling fatigue.
Other times, my inner critic shoves me into the abyss, where I have trouble functioning, where my stubbornness does nothing for me. In that deep pit of darkness, I’m not even capable of thinking of such things as challenges, or dares, let alone of fighting.
Inside the abyss I am helpless, and I allow my inner critic to triumph. That’ where I need another way to handle it. Perhaps that’s where compassion will help.
According to Judy, my inner critic isn’t me. It’s a separate entity. A being, perhaps?
I named my inner critic Shoshana, which in Hebrew means rose.
When she works to prevent me from approaching dangerous zones, I try to see her as a protector. She cares about me and wants to keep me safe. I try to be understanding. “I know you care and want to keep me from harm. But you’re missing the bigger picture. I need to go there.” or “I need to be able to ask for help when the bloody brain lashes out at me, otherwise I’ll be in even bigger trouble.” I tell her, “If I hadn’t written about my relationship with suicide, I wouldn’t have had the opportunity to understand it, to watch for the danger signs.”
I am now better able to deal with her. During a recent visit with my brother and sister, I started developing an excruciating headache. No, I shouldn’t have reached that point. I shouldn’t have listened to Shoshana, who urged me to refrain from disappointing my family. I should have told them that I had to bail on some of the joint activities to take a much needed nap.
Finally, the bloody brain made it clear that my headache was just going to get worse. Finally, I told Shoshana to be quiet, that I absolutely had to miss dinner and leave the hubbub behind me before it was too late. I explained to her that by resting now, I’d be able to join in on tomorrow’s activities, that if I didn’t leave, I’d be in trouble for the rest of my visit.
Judy spoke of telling my inner critic to sit down and shut up. But for me, it seems that a brief explanation works better. If I am to be compassionate, I can’t be rude to her, except in extreme cases.
I know that there will be times when neither compassion, bullying, nor taking her on as a challenge will work. I will procrastinate at times. I will have trouble focusing. And I won’t want to disappoint others. i have to pick my battles. Perhaps by allowing her to win sometimes, I am saving on resources so that when it is important I will have the wherewithal to resist Shoshana’s temptations.
Now, Shoshana, my rose, awaits. This time I have triumphed and written about her. Now it is time for a nap, though a difficult essay beckons.