I realize I’m clenching my teeth, but when I try to relax my jaw, I feel the moisture build up. I tense the muscles of my jaw again and swallow. I swallow once more and the moisture recedes from the surface. The tears won’t overflow, quite yet. 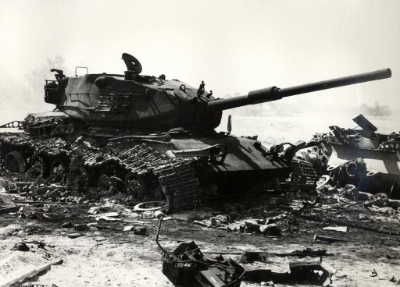 I’ve been trying to work on an essay entitled “Monster,” which is about an encounter I had during the Yom Kippur War. I was a thirteen years old, with the rest of my scout troop, visiting wounded soldiers. Our troop leader had come up with the brilliant idea to send us over to the local hospital to cheer them up with bright smiles, inane chatter, and candy.
Among the soldiers was one who left me in shock, horrified, terrified. He was badly burnt, his face a motionless mask of raw flesh.
I’ve been working on the essay on on and off over the past seven years. Every time I delve into the story, I find myself tearing up. When the tears start to overflow, I take a much needed break. Occasionally the break lasts a matter of hours, but I usually need a few months’ recovery time before I can get back to it. At one point it tookmore than two years before I was ready to confront that particular demon again. But I keep getting back to it. I need to write about it, about him.
Writing his story, our story, has led me down some interesting paths and diverted me from others. Twice now, I started writing a seemingly unrelated story, when mid piece I found myself writing about the burnt soldier. The first time it happened, I was working my way though another emotionally charged story.
The second time took place just now. I was writing about my “inner critic,” whom I had named Shoshana, that voice that tries to prevent me from venturing outside my comfort zone. She often stops me from asking for help when the bloody brain is being difficult. “You don’t want to be a burden on others, nor do you want to make a spectacle of yourself.” She also tries to prevent me from writing about difficult topics.
As I frequently do when my inner critic rears its head when I write, I treat her as if she is challenging me and tell her to be quiet. Like I did this time. I was writing about my inner critic and was trying to come up with an example, and he showed up, the burnt soldier. I gulped and continued to write about him despite Shoshana’s desperate attempts to switch to a different example, something light hearted.
But I didn’t give in, I can’t give in. My brain keeps bringing me back to the story, insisting I write about him. But its hard, Shoshana isn’t the only thing standing in my way. I recognize the signs–residual PTSD (Post Traumatic Stress Disorder) at work.
I’m going to have to take a break soon.