My Story is broken. The break lies between my old life, before the brain bleeds, and my new life in the wake of the surgeries. 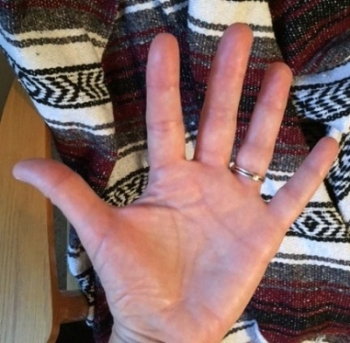 As a teenager I became convinced that at some point I would undergo a life changing experience. As an adult it became a fact in my mind. For no logical reason.
It started with mild curiosity about palm reading—my life line was broken. It was in two pieces that lay parallel to each other, overlapping for a short stretch. At the time, my interpretation, based on nothing, was that somewhere in time, my life as I knew it would end, and as it approached its end, my new life would continue. Hence the parallel overlap.
Until the brain bleeds, when confronted by anything woo-woo, I immediately scoffed at it. There was no Earthly reason for me to take my broken life line seriously. But I did. And throughout my adult life, I’d wonder about it every so often. Was my story going to end? Would it resume in a different form while the first was waning? Did it indicate a drastic changed in careers? Perhaps it had something to do with having kids. But none of the theories felt right. Until the brain bleeds.
Lying in bed one day, a few weeks after I returned home from Arizona, where I had the surgeries, an epiphany struck hard—this was what the break in my life line was about. The break and overlap corresponded to the stretch between the brain bleeds and the surgeries. And now, I am living my new life, the remainder of my life line.
Even now, as I examine my emotions and thoughts through the years about the break in my life line, I have no explanation for them. And at no point did I question them. Foreshadowing? Premonition? Residue left over from my teenaged naïve search for the meaning of life? I have no idea, and quite frankly, I don’t really care—it was, it happened, that’s how I felt and thought.
Whether my life line had anything to do with it, there is a semicolon in my life’s story, a pause.
I paused between the bleeds and the surgeries. My life revolved around the bloody brain. I had little room for anything else. Numerous doctors’ visits, trips to the ER, which always resulted in hospital stays, seizures, indescribable headaches, severe vertigo, loss of balance, tremors, confusion. I couldn’t drive, I couldn’t teach, I couldn’t take care of my kids.
I wasn’t living. I was merely existing, shuffling from day to day, hour by hour, hoping I wouldn’t take a fall.
But, unwilling to accept this mere existence, I decided to take a chance. My only hope for reclaiming my life was to undergo brain surgeries. There were no guarantees, I could die, get lost in a coma, or become a vegetable. But the odds were in my favor. According to the neurosurgeon, I had a more than 90% chance of a successful outcome. I wasn’t sure what he meant by success, but I was willing to place my life in his hands.
The surgeries marked the end of my three months long semicolon. It was time to move on with my new story, a story of ongoing recovery, of living with the threat of another bleed, a story of growth, of life.