I rush upstairs to the bathroom to study my reflection in the mirror on the medicine cabinet door. I’m excited to see my new buzz cut. I’d wanted one ever since the surgeries, but Gaye, my hairdresser, kept refusing. Finally, more than two years into my recovery, to my delight, she agreed to do it.
I smile at my reflection. I look good. Short hair has always suited me.
I twist this way and that, craning my neck, adjusting the mirrors. I freeze—I see it. I study the short pink line that runs up behind my ear then disappears into my hair only to reappear half an inch farther up as a bald patch, an oblong pink gap in my hair.
I try to feel for it as I gaze at my reflection, but the mirror image confuses me. I close my eyes, touch my ear for reference, then run my index and middle fingers through my hair, a bit to the left, then down…and find it. 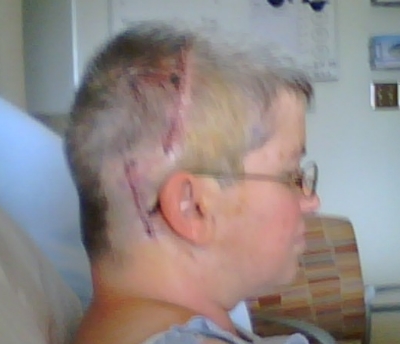 I slide my fingers down to the tail end and then back up, until they dip into an indentation. I recognize it; I’ve felt it through my hair often in the past. But now I can actually feel it directly, without my hair getting in the way. It’s a bit tacky, almost gummy. I continue to explore. The newly exposed part extends a tiny bit past the indentation before it disappears into my hair.
I raise my head and once more locate my scar in the mirror. The scar is very pink, a pink that stands out, a satisfying pink, a pink that indicates scarring from a serious injury such as brain surgery. But not too pink, not raw, not horrifying, not like in the photos Jonathan took of me within hours of the surgeries.
Until now had felt as if the scars in his photos belonged to a stranger. Now, after the buzz cut, I felt as if my hunger had been sated. Was this about my need to claim ownership of the scars, my scars?
Over the next few days, I’d periodically run my finger up and down the scar. When I reached the indentation, I’d massage the tacky area that had been in hiding for so long.
Several days after the buzz cut, before I left the bathroom to start my day,  I gave my mirror image a quick glance and thought to check the scar. I angled the mirrors just so, and tilted my head just right. I located the scar, but it was all wrong—it was no longer pink. It was almost invisible. How could that be?
I thought back to the day of the buzz cut. It was hot that day; I’d just walked back from the hair salon. The scar was probably pink from the heat. Whereas today, I’d been in the air conditioning for a while.
I gazed at my reflection, studying the scar. It was slightly paler than the surrounding skin, the shade of an old, healed scar. I closed my eyes and searched for it with my fingertips. It was there, I could feel its rubbery texture.
I turned back to the mirror. My hair had already started growing in, erasing some of the evidence of my ordeal: the tail of the scar had shrunk, as had the tacky bald patch. What remained of the scar no longer validated the enormity of the bloody brain experience.
I felt cheated. It was too soon. I hadn’t had my fill. I hadn’t had enough time to get used to it, to grow familiar with it. The scar, which had seemed so real a few days ago, had lost its tangibility.
Would Gaye be willing to grant me another buzz cut?