“You need to take a day off. I mean off everything. When you don’t have to go into work. A real break. Your brain needs it. You’ve been doing too much. No reading and definitely no writing.”
Cindy was right, I was totally exhausted. I’d been going strong for a couple of weeks, and the bloody brain had been complaining. Between meltdowns and an excruciating headache that lasted a couple of days, the message was loud and clear—my brain needed some time off. But no reading? And no writing? I had to write, I couldn’t just not write.
I knew that lack of sleep was hard on the bloody brain, as were stress and sensory overload. But I kept forgetting that thinking, concentrating for prolonged periods of time takes a heavy toll as well. 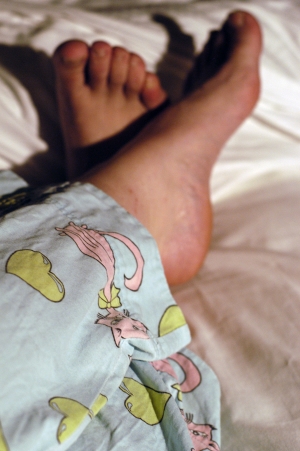 The opportunity to take a break didn’t arise until a couple of weeks later. I had to conduct a couple of phone interviews in the morning and another after lunch. It was the perfect opportunity to take the day off—I didn’t go into work.
I’d originally planned to go grocery shopping between the morning interviews and the afternoon one, but I’d had a lousy night’s sleep, so, instead, I decided to take a nap. I couldn’t get to sleep, but I stayed in bed reading and resting. I got up just in time for the third interview.
After it was over, I contemplated grocery shopping but decided that I’d rather write instead, which I did for about an hour. Then fatigue struck again and I went back to bed. Though unable to sleep, I stayed in bed reading.
At that point, I realized that I was having a lazy day—I was following Cindy’s advice. I decided to back it up with action, or inaction, as the case may be. I wouldn’t take my shower, I’d stay in my pajamas the rest of the day, and I wouldn’t write. I’d give my brain a complete break.
Filled with pride and conviction, I got up and started preparing for lecture. I was on a roll, so I prepared for a couple of lectures.
As I ate dinner I mulled over my day. I was looking forward to reporting to Cindy about my lazy day. I had absolute proof that I’d taken it easy, and no writing!
Then it hit me. It had been a productive day—I’d conducted three interviews. But I could still tell Cindy that I’d taken a break since the interviews were fairly short. I’d spent about two hours, maybe more, preparing for lecture. Well, that didn’t count because it was my job. I could at least brag that I hadn’t written. But…I had, earlier, for an hour or so…
My shoulders slumped. It hadn’t been a lazy day after all. Cindy was right, I was incorrigible. I gave up on myself and went upstairs to write this piece.
But I did stay in my pajamas all day—that had to count for something.