The bloody brain presented me with the opportunity to reinvent myself. One of the choices seemed obvious—a procrastination coach. The gains from the brain damage incurred by the bloody brain included some new skills—I discovered writing, I became a better teacher, and had developed a talent for procrastinating.
My original thought was to write a text book on procrastination. The task stayed on my to-do list for several years, until I finally came to the conclusion that a better choice would be to become a coach. And over time, as I gained experience, I’d be able to write an improved version of the book I had originally envisioned. I modified my task list accordingly; the next task on my list was to look into the logistics of becoming a coach.
I decided to get to it soon.
But like many other brain injury survivors, this new talent wasn’t exactly procrastination. My neuropsychologist told me I was having issues with task initiation—a common affliction among brain injury survivors. The end result is akin to that of severe procrastination—things don’t get done.
However, the two processes, or lack thereof, feels completely different, similarly to the difference between various memory issues we have all experienced.
I was on the phone to Joyce. “You know the actress, she played the mother in Mamma Mia. What’s her name?”
You wrack your brain for a while but the name just will not surface. You let it go, end your phone call, and continue with your day. As you wash the dishes, an hour later, her name suddenly pops into your head. Meryl Streep.
Sometimes the memory is right there, on the tip of your tongue, and you know that it’ll surface at some point. Other times, the memory is just not there. It’s gone from your short term memory file, and it never made it into any your long term memory files. It’s just gone.
The difference between procrastination and brain injury related trouble initiating has a similar feel to it.
I still procrastinate like many people, like I did prior to the brain bleeds, but now, in addition, I have trouble initiating tasks. Procrastination is more of a choice, whereas when I have trouble initiating tasks it’s almost as if there is a something blocking the neurons from sending the relevant messages. 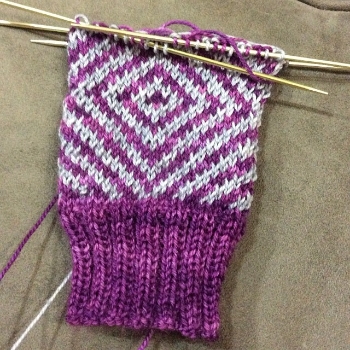 Unlike procrastination, instead of having to find the impetus to get started, it’s as if the impetus was never there and has be generated out of nothing. Trouble initiate a new task often comes out of the blue and can last days, sometimes years. In some cases, at some point, I come to the realization that a given task will not get done, ever, no matter how much I would like to get to it or how minor it is.

It’s not about not being in the mood for a particular activity, nor is depression the problem. I am neither lazy nor lethargic. In fact, when I am well rested, I am raring to go. I want to act but cannot, even if I have completed all the steps leading up to this new task and have tried to prepare myself mentally. I fully intend to, I know I will, but I don’t, I can’t. It is as if a hex has been laid on me.

Once I’ve initiated the task, I take off with it. Whether it’s an annual report that needs to be written, a book I am looking forward to reading, or knitting a second sock.
Launching into a new activity is the problem, nothing more, nothing less.
I suspect I will never become a procrastination coach.