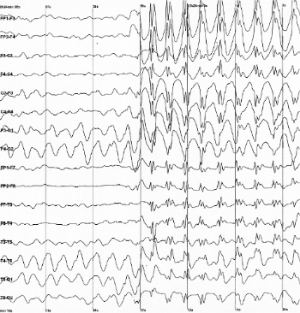 EEG exhibiting seizure activity.
Dr. Robert said that I only had two angiomas. Dr. Stuart told me that of my multiple angiomas only two had bled. But according to the brain MRI report, there were indications of “hemorrhage scattered throughout the hemispheres and in the right middle cerebellar peduncle.” (The cerebellar peduncle is the part the connects the cerebellum to the brain stem.) It also mentioned that “multiple cavernous angiomas are favored.”
Dr. Michelle told me that my EEG was normal, and therefore my seizures were not epileptogenic, that they were pseudo seizures, that I needed therapy, that I was seeking attention. I pored through my records, including that particular EEG report—every single one  of my EEGs exhibited abnormal brain activity. Not one of my EEGs was normal. Some showed clusters of spikes, indicative of epileptic seizures. Most exhibited single spikes, placing me in the category of high risk for epileptic seizures.
And recently, Dr. Stuart said that my latest brain MRI was the best he’d seen, that I have no reason to worry. But the report indicated that I have new angiomas, one of which had bled.
What other “minor” details have the doctors failed to mention?