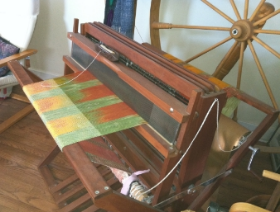 Weaving and spinning…
A brain injury survivor posted on Facebook, “I miss the old me.”
With little thought I responded, “I don’t think I do anymore, not really.”
Have I really let go of the old me? I don’t believe so. At the very least it provides a reference point for the new me. In fact, the old me is very much a part of me, it is the foundation upon which the new me stands. But now, I am more, much much more than the old me. The old me was a washed out version of who I am now.
During the first few months after the surgeries, I wove a piece of silk yardage. I planned to submit it for exhibit at an international weaving conference. I had trouble remembering many of the steps along the way and kept making mistakes. All too often, I retreated to my bed to soak my pillow with tears of grief and frustration. But I always went back to fix my mistakes and move on to the next step. 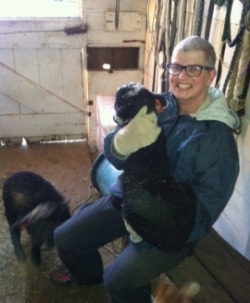 Playing at farming
I had no choice but to learn patience. I paid a heavy price whenever I overdid things, with crippling fatigue, debilitating headaches, and terrible balance. It was a slow process, compared to how long it would have taken me in the past. But I finished it.
I couldn’t have woven such a piece in my previous life. The interplay between the colors, the different textures, and the sheen and flow of the silk, was far beyond my pre-bleeds ability.
For several years, I was very much torn between the old me and the new me. I had trouble accepting who I became in the wake of the surgeries and kept trying fit the old me into this new world. I tried to understand the new path I was on through the eyes of the old me, the eyes of a neuro-typical. I had to learn to stop using out of date benchmarks to measure successes and failures.
I do occasionally miss the ease at which I used to live my life. But I believe that that ease was also partly responsible for stunting my growth. I believe that having to slow down and work harder to stay afloat has helped me grow. 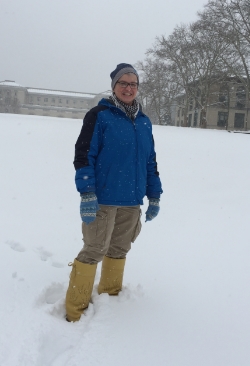 About to have a snowball fight with students.

I like the new me so much more than I do the old me. I’ve become more whole as a person, as if there were pieces of me missing that I have now found. I have become stronger, more authentic, truer to myself.

But I have not completely let go of the old me—it’s not possible for me to bury her completely. Nor do I wish to. She’s very much a part of me as I am now and continues to play an important role in my growth.