Gus stiffened, his ears perked up. I too stood still, trying to identify the sound coming from beyond the trees. A big bunch of keys rattling around in a metal container? Or was it more like a bell, a small cowbell? It was odd, out of place.
I then caught sight of him through the trees, striding along. It crossed my mind briefly that the jangling sounded separate—though he seemed to be the source, the sound didn’t match the rhythm of his gait.
I shrugged it off as one of those mysteries that will remain unsolved, and turned to continue on our walk. But Gus’s ears were still perked up, his nose in the air, quivering, sniffing. Noticing a gap in the trees, I decided to take a quick peek to satisfy Gus’s curiosity. As soon as I made my intention clear, Gus took off like a man obsessed, pulling on the leash. At first he tried to gallop but quickly settled into a brisk trot, with me behind, gripping the leash firmly, my arm outstretched. I followed him at a quick walk, refusing to break into a run—it was too hot and humid.
By the time we reached the trail, there was no one in sight. I thought that Gus would lose interest and stop or at least slow down. But he was bound and determined to catch up with this guy no matter what. He kept going at that same brisk trot with a constant pull on the leash.
A couple of times, when we turned a corner, I’d see the guy in the distance. The first time I spied him I despaired—we had no chance of catching up, he was so far ahead. But the second time he became visible, the distance between us had noticeably shrunk.
Finally, more than half a mile down the trail, we caught up with him—a young man, friendly, and at his side, a beautiful lithe young lady wearing a sleek black coat—a beaming six-month-old black lab, a miniature cowbell hanging from her collar, jangling with every move.
Gus strutted up to her and sniffed her bum. She, very much the puppy, took off ready to play. Quickly, we became a tangle of legs, leashes, wagging tails, and smiles. 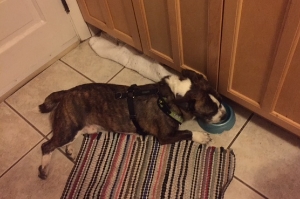 Suddenly, mid-play, Gus plopped down on the ground, panting heavily—he hadn’t yet recovered from charging along the trail to catch up to his sweetheart—he had nothing left. His beloved continued to dance around him. Unwilling to give up, Gus drew on his reserves and staggered to his feet to continue their game.
Fortunately for poor Gus, at that point, their play was interrupted by the sound of a train. The young man took it as a signal that it was time to part ways. Gus gazed after her as she trotted off, tail wagging, bell jangling. He was only ready to head homeward when she became a small black silhouette in the distance, the sound of her bell was completely muffled by the train.
Gus didn’t pull on the leash at all on our way home, and though he proceeded at a fair trot, he had to stop every so often for a brief lie down.
When we finally got home, leash dragging behind him, he made a beeline for his water bowl, plopped himself down beside it and buried his snout in it, lapping water thirstily. Every so often he’d rise for air and rest his head on his paws. 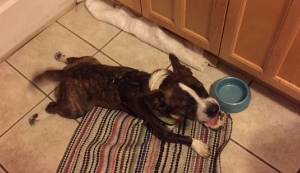 After he finally slaked his thirst, he remained sprawled out on the kitchen floor, his head resting on his front paws, tongue lolling, sides heaving.

It seemed like an eternity before he scrambled to his feet and made his way out of the kitchen.