I remembered a scene from eight years ago, a couple of months before the brain surgeries. I was sitting on the bed surrounded by the tools I needed to make chain mail jewelry, cutters, pliers, and of course the rings, silver jump rings. 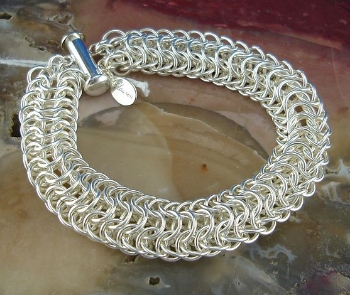 I was working on a chain mail bracelet for a friend, Sara. Before the brain bleeds it would have taken me no more than three evenings. But because of issues with tremors, I’d been working on this one for over a week now. My hands shook so badly that I was having difficulties holding those tiny rings. When I wasn’t dropping them, I was having trouble closing them seamlessly as I used to, before the tremors, before the brain bleeds.
I kept going. I’m stubborn that way. And the bracelet came out nicely.
I’d forgotten about those tremors from long ago, probably because the brain surgeries took care of them. Or so I believed. Until today.
I first noticed it in my ankles. I tried to brush it off as a first sign of my balance issues acting up—I’m used to bouts of lousy balance. But this felt a bit different, more jerky. Puzzled, I assessed my overall well being and became aware that everything felt jittery, my breath, the beating of my heart, my bones. I wondered whether this was some sort of panic attack. But the inner jitter quickly receded from my consciousness when I noticed the tremors in my hands.
A wisp of a memory tried to waft up to the surface. I shoved it out of the way—I didn’t want to know, not yet. I decided that a nap would take care of it—when I woke up, all would be well.
Except that it wasn’t—when I woke up, the tremors were worse, and they were accompanied by a bad headache. I lay in bed, trapping my hands under me in an attempt to quiet the tremors and the memories streamed in, memories of difficulties writing with a pen shaking in my hand, memories of making jewelry, sometimes frustrated, but mostly laughing at myself for having the “dropsies.” And I remembered being fed up, lying in bed, trapping my hands under me to stop them from shaking.
Even now, as I type, I keep making typos, reppeaating lettters, predding, NO—pressing the wrong keys, too many spaces. I’m not laughing at myself, nor am I frustrated. I’m more resigned—I’ll be keeping an eye out for additional or worsening symptoms over the next couple of days, as I have in the past whenever the bloody brain reared its head in an unusual way.
It’s a bloody nuisance, somewhat disturbing, and a tad scary.
At least the headache is on the wane.