I’d already bought the fiber, I was now mentally preparing myself to teach Paul how to spin.
Paul and I are kindred spirits. We discovered each other through yoga. When we first met, I knew there was just something about him. It was as if we’d been close friends in a previous life. In time, we learnt that though we came from completely different backgrounds, we had a lot in common.
I quickly found out that we had extraordinarily similar tastes in literature—we both enjoyed children’s books and liked the same novels and memoirs. Next, I discovered that he’d done some miming—I’d dabbled briefly with street performing. I was amazed when he mentioned that he’d done some rug weaving. He’s also a knitter and a felter. I too am a weaver and a knitter, I also crochet, and have done quite a bit of felting. The clincher came last week—we both took a quiz “Which TV Mom are you?” and we both got Morticia Addams. 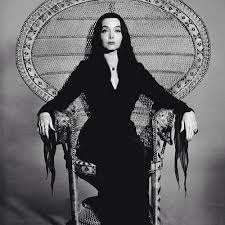 But there was one glaring difference between us—I am a spinner, and Paul is not, at least not yet. It was time for him to learn.
A couple of weeks ago, I brought one of my spinning wheels (the #Schacht #Ladybug) to yoga class. I was going to rectify the wrong—I was going to teach Paul to spin, after class.
Paul, eager to learn a new fiber technique, needed no motivation. He also understood the bigger picture. I just needed to fill in some details here and there, which I did as I demonstrated.
Next I had him practice treadling while keeping the wheel moving in one direction, counterclockwise. Once he had the treadling under control, I attached a length of yarn to the bobbin and had him experience the pull on the yarn and later the movement of the twist. Then it was time to put it all together.
I started by treadling while I talked him through the hand motions. Then I demonstrated again while he treadled. I showed him how to pinch the fiber at the source to prevent the twist from traveling into the virgin fiber.
Then it was his turn again. As he spun, I kept reminded him to maintain a light touch on the fiber and the yarn in the making. “It’s like riding a horse, you don’t want to yank on the reins, nor do you want them loose—you hold the reins to keep in touch with the horse’s mouth. It’s the same with spinning, you want to feel it as you spin, to monitor the quantity of fiber flowing out of the source, and the quality and form of the twist going into the yarn.”
I watched him struggle for a while. He had the right idea but clearly needed something more to help him acquire a sense of the rhythm. It was hard not to take over. As I envisioned my hands on the fiber, I realized how to give him that sense of rhythm–I guided his hands with my own, applying and releasing pressure when needed, to keep the fiber flowing evenly from the source and to control the twist. When I felt his hands take on the rhythm, I let go, and he was off and running.
I have enjoyed teaching children to spin and weave and I’ve have a lot of fun teaching felting and dyeing. But teaching Paul was special. I came away from the lesson with a goofy grin on my face. Not only had I enjoyed myself because of my love of teaching and spinning, but also because I was giving Paul, an unexpected friend and lover of fiber, a piece of myself. I gave him a gift he I knew he would truly appreciate and might actually come to love as much as I do.