After much deliberating, I posted the following on my Facebook timeline: 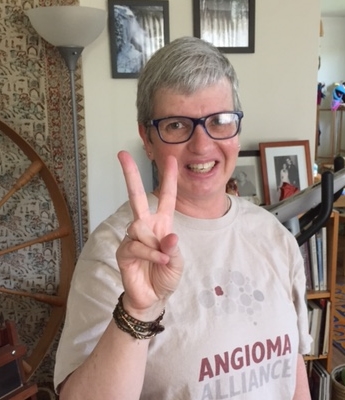 “More than seven years ago I suffered life changing brain bleeds from two of multiple cavernous angiomas. Following three brain surgeries to remove the bleeders and do some plumbing, I started claiming and reclaiming my self and my life. Just recently, I found out I now have a couple of new angiomas, one of which has bled. Luckily, this time, there has been no noticeable damage.
The Angioma Alliance www.angiomaalliance.org, is an organization for those affected by the disease. In a campaign to raise awareness, we are posting selfies with a peace sign, the hashtags ‪#‎BrainsShouldntBleed‬ ‪#‎PeaceOfMind‬ ‪#‎Stroke‬, and the link tinyurl.com/AngiomaVideo.
I’m also supposed to nominate 3 friends (or enemies) to do the same or make a $10 donation to Angioma Alliance at angioma.org/donate. (A la ice-bucket challenge.) But that’s well outside my comfort zone.”
It’s important to me to raise awareness about this rare disease. The only cure is brain surgery–not exactly at the top of my favorite extra-curricula activities. The disease and alternative cures are being studied, but the research funds are few.
I played a role in the video produced by the Angioma Alliance. (Yes, that’s me, with the short silver hair, and those are my words.) It’s a powerful video and I’m proud that I had a part in it.

I also wanted to participate in this campaign. The selfie was easy, though I had my son take the photo, rather than attempt a selfie–I’m just no good at those.

I was happy that the choice of symbolic gesture was a peace sign. We certainly couldn’t have gone with something analogous to the ice bucket challenge. The idea there was to make the point that those with ALS lose feeling. Somehow, hitting people over the head doesn’t seem like a good idea.
But I was having trouble with the wording. I’ve never been good at fundraising, I have trouble asking anyone for money, even as payment for services rendered (I have yet to ask for a raise at work). It makes me feel uncomfortable.
I compromised. I did not challenge anyone, but I did mention the challenge. I’m glad I did it, but I still have a foot outside my comfort zone.