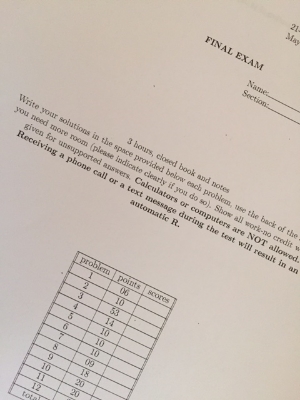 It’s Wednesday. I’m administering a final exam on Friday, bright and early in the morning. And I have yet to write it. I’ve started it, but I keep postponing getting to the meat of it. I write a problem, then let it sit until the next day. It’s so uninteresting, a distasteful task. There’s so much else I’d rather do. I want to write, play with Gus, go out to lunch wit friends, and just hang out.
But it has to be done. I know that this afternoon, I’ll sit myself down and do it. I know that this evening, I’ll go through it carefully, solving each problem, making sure that the numbers come out nicely, that all the instructions make sense. I know that tomorrow, I’ll give it one last look through. And once satisfies with it, I’ll hand it in to Ferna to photocopy it for me.
When I procrastinate, I’m very much in control.
But when I’m having trouble with task initiation, I feel as if I am not the one at the helm. The difficulty is neurological, bloody brain-related. I may want to do something, like start knitting a new pair of socks. I may look forward to it, imagining hours of busy relaxation, my mind roaming freely as my hands move purposefully.
But for some reason, I just can’t seem to get started. The yarn is right there, I know exactly what pattern I wan to follow. The right size knitting needles await with the rest of my needles. Everything is ready. But I’m not. I can’t get up, collect everything and get started, even though this is a task I don’t consider to be a task—I would really like to get to—I know I’ll get started on it. I will start casting on stitches for the first sock, but not right now.
Trouble with task initiation and procrastination, though they lead to similar results, feel so very different. In both cases, the knowledge that I’ll get to the task, is absolute. Though with procrastination that absolute is more relaxed, amusing. Whereas there’s nothing relaxing about the absolute with task initiation. The knowledge just is, a fact, not to be questioned, not to be discussed or joked about.
When the bloody brain prevents me from picking up those knitting needles, it feels like there is a disconnect, something blocking me from the task, something other than myself. It feels like a hex has been laid on me. Trouble initiating tasks is akin to how I felt prior to the brain bleeds when I’d just completed a big project, and had to begin a new task. But those pre-bloody brain experiences pale compared to this bloody brain related trouble I’m having.
Sometimes, out of the blue, with no urging from me, the bloody brain will remove the block completely, leaving no evidence of it having been there. And I set to knitting as if I’d meant to get going on it at that point all along. And once I get started, nothing can stop me. Once again, I am in control.
I got the final exam done, as planned. But I have yet to cast on the stitches for that first sock—it’s been three or four years now. I know I’ll get to it, just not now.