Marty had read my blog post “Sanctuary.” He asked about the guy named Eric I mentioned. Could he be the Eric he knew from the ski patrol. “He had a stroke. Last I heard he was in a wheelchair.”
I had no idea. But I could easily see him as having been a serious athlete. He gives off vibes of being very strong, physically and psychologically. He’s a solid guy, stocky. Soft spoken, but really determined.
Eric and I exchange little more than pleasantries when we see each other at the yoga studio. We speak briefly during the few minutes before class. But once the therapy yoga class is under way, there’s no distracting him—he’s very intent, working diligently on his exercises. Sara, our yoga teacher, had once mentioned that she has to watch him so that he doesn’t overdo it.
I knew he’d suffered a stroke two and a half years ago,that his brain stem was affected, hence his horrendous balance. When I first met him, a year ago, he was confined to a wheelchair, and when he had to abandon it to follow his sequence of poses, he had to crawl on the floor. Now, his wheelchair is nowhere to be seen—he uses a walker to get around and he is able to stand unassisted a few minutes at a time.
Today, before class started, I asked him whether he is Eric from the ski patrol. He smiled and nodded. “Yes, I am.”
I explained about my connection with Marty. Yes, he knew Marty. “They haven’t thrown me off the ski patrol yet. I’m planning on going back.” 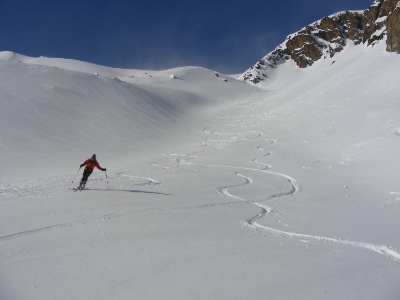 I looked at him sharply. Was he joking? Or did he truly believe it was in the cards? It’s been two and a half years. Surely he should have made his way out of denial. On the other hand, who was I to say? He certainly knew himself and his body better than I did.

He walks slowly. Five minutes before class was about to start, he got to his feet.

I turned towards him. “We still have five minutes.”

He chuckled. “It’ll take me that long to get across the room.”

Today, I saw him standing at the trestle, practicing his triangle and warrior poses. Yes, he used the trestle for balance, but he certainly wasn’t leaning on it heavily.

Perhaps he will make his way back to the ski patrol, in a few years. I can certainly see him skiing again.