The winter session was a bust as far as I was concerned.
I made it to the first yoga class of the winter session, then I had to skip a couple of weeks worth of classes because of the flu. Next was a long period of severe asthma. Everything triggered an episode, teaching, breathing the cold air outside, climbing a few steps. It kept me from yoga for another couple of months. And the bloody brain dealt the final blow—a horrendous headache prevented me from attending the last class of the session.
During that entire session, I made it to one class.
Yesterday was the first day of the spring session.
Stepping over the threshold into the studio, I felt as if I was entering a sanctuary. There was Eric to welcome me. Last I saw him, he was confined to a wheelchair, now, he was standing on his own, without any signs of teetering. He still couldn’t walk unaided, but he was walking.
Eve was next to walk in the door, then Mike, or was it David? How could I have forgotten his name? He had a brain bleed, similar to mine. Paul was next, surfing Paul. It was good to see him—it had been a while. He’d fallen and broken his hip, or was it something else? He had to skip both Fall and Winter sessions. Stroke Paul was nowhere to be seen. It wasn’t like him to be late. I wanted to congratulate him on getting back to writing.
I was glad to be back.
I set up my mat, with a bolster and a couple of blankets. But how did the blanket for my head go. Did I fold it in thirds? Lengthwise or— I searched for Sara but she was talking to Eve and yoga Paul was helping surfing Paul. I looked at my folded blanket doubtfully. It didn’t seem right, but it would have to do. I lay down on the bolster. It didn’t feel quite as comfortable as I thought I remembered. I tried breathing the way Sara had showed me, but that didn’t feel quite right either.
The humming breath seemed to go better. And I felt more confident with my next couple of poses, but when it was time to do my standing poses at the trestle, I was at a complete loss. I had to ask yoga Paul for help. None of them felt right, and my headache started up again.
I was almost relieved—I remembered a couple of the restorative poses that would help with the pain. Except that I didn’t. Did I need two chairs? One, or two bolsters? How was I supposed to position the bolsters?
I felt as if I didn’t quite fit into my surroundings, in what used to be a sanctuary. I felt a bit lost. 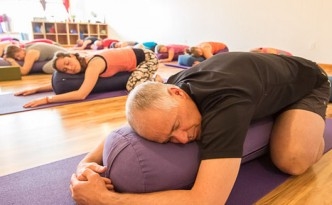 I gave up and tried the simpler pose. I still had trouble figuring it out, but I managed something close enough—I started feeling better within ten minutes. All feelings of unease melted away, and with it, my headache.

Just as I was getting up, Sara stopped by to talk, to evaluate where I was and what my goals were. I told her about the stress at work, about the brain bleed and the headaches, about missing all but one class of the Winter session and my difficulties earlier in the class.
“I think we’re going to have you do just restorative poses this session. For your headaches and your nervous system. We need to quiet your nervous system.”
And once again, I found my place in my surroundings.