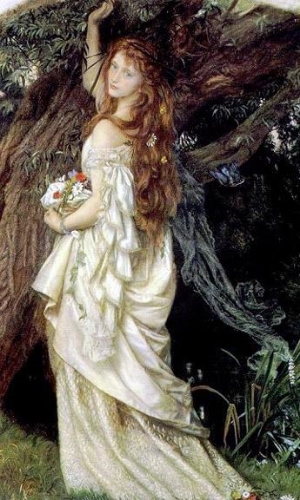 Arthur Hughes–Ophelia
I grew up across the ocean, I didn’t understand the world I brought my kids into. I had largely assimilated myself into American culture as a woman, but I felt completely out of my depth as a mother. Since my own adolescent-experience was particularly harrowing,  I was concerned about my daughter’s teenage years, especially since American culture seemed to be much harder on teenagers.
When Sarah was still little, I read everything I could my hands on about raising girls in this society. I read books such as “School Girls” by Peggy Orenstein and “Reviving Ophelia” by Mary Pipher. I emerged from each book quite disturbed.
Though I was aware that many girls have trouble with their self esteem as they go through puberty, I was surprised and disturbed when I learnt that many girls lose their voice, their identity, as adolescents. Among those who lose themselves, some regain their identity to a certain extent, but far too many, living through and for others, never regain it.
Until the bloody brain, I had no idea the I was one of those women who had lost their voices. In fact, I believed I was one of those few lucky ones who escaped that fate. However, looking back, with the increased self-awareness granted me by the bloody brain, I now realize that I was not as fortunate as I had thought, that in fact, I had I lost my voice and continued to lose pieces of myself through the years.
It is only now, more than three decades since I was a teenager, that I am finally able to repair the damage, to reclaim my space. It is only now that I realize that regaining my voice will be a journey of a lifetime, a journey shared with the healing of the bloody brain, a journey of discovery and rediscovery.