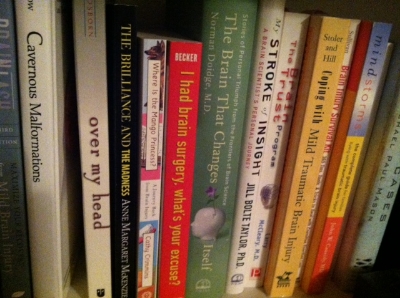 “Mind Storms,” “Head cases,” “Over my Head,” “My Stroke of Insight,” all clever titles for memoirs about brain injury survivors. Then there are the titles that reference something in the body of the book, like “Where is the Mango Princess?” or “I had Brain Surgery, What’s Your Excuse?”
I wanted to entitle mine “The Bloody Brain.”
Ever since my brain bleeds, I have referred to my brain as The Bloody Brain. Having been born I England, I felt it was an apt name. And ever since the idea to write about my journey came to me, days after the third and last of my brain surgeries, I’ve use “The Bloody Brain” as the working title for my manuscript .
My editor, Judy, told me, “Publishers are not going to allow it. The American public might not get it.”
In response, I suggested “The Bloody Bloody Brain.” She laughed.
Judy was right, of course. After I signed a contract with a literary agency, my agent insisted that I come up with an alternate title. Judy and I put together a list: “Betrayed by my Brain,” “Torn from my Moorings,” “The Time Bomb Ticking in my Head.” But my agent didn’t like those. We sent her “Cracked Open,” “No End to the Tunnel,” “Dragged Through the Hedge Backwards,” and a whole bunch more. She didn’t like those either.
My agent finally picked “What I Used to Know” which was nowhere near the top of my list. I preferred “Beyond Acceptance” and “Voyage with No Compass” among others.
Having forgotten our motivation for putting on the list, I asked Judy about the significance of that title. She joked, reminding me of “A Hitchhiker’s Guide to the Galaxy” when Benjy Mouse and Frankie Mouse are discussing what “42” means, and trying to come up with a question to go with it, and one of them says something like, “Sounds good, but doesn’t really mean anything…”
I agreed to go with “What I Used to Know” anyway. After all, I knew very little about marketing. Also, as Judy said, “The Publisher will probably want change the title again anyway.”
I wonder what the final title will be? My favorites are still “The Bloody Brain” and “The Bloody Bloody Brain.”