After the thudding came the tapping, then the sound of a bus engine idling. Next the amplified buzzing of a bumblebee, and again, “Thud, thud, thud.”
I could certainly think through the silences between the knocking and clanging, and I was okay with monotone noises, like whirring or buzzing. But I just couldn’t focus during the intermittent sounds.
As I lay still inside the MRI machine, my head caged, wedged in with pieces of foam to keep me from moving, I kept my eyes closed. With thirty minutes ahead of me, I searched through my mental files for ways to pass the time.
When my mind roams, it often turns to writing. Amid the jack-hammer type noises, my thoughts went back to some of the essays and blog pieces I’ve been working on lately. Where should I go with the essay about my psychological healing from the bloody brain? I mused over the blog piece about playing with Gus. It occurred to me to write about my experience inside the MRI machine. Where would I start? Should I mention the stinky guy ahead of me in line?
I wondered at myself—how could I possibly think through all the noisy interruptions? But I could and I did, though I was only able to think in snatches, and I kept forgetting my thoughts from one series of sounds to the next. Still, after every disruption, my mind went back to my writing.
My neurologist has been monitoring the angiomas since the bleeds. He’s been sending me in regularly to undergo MRIs. He’s always been pleased with the results—no new bleeds, no changes in size, no new angiomas.
Until this year, I’ve always been anxious going into the MRI, afraid that there’d be bad news. This time, not only was I not at all nervous, but I actually came away in a great mood, happy with my new ideas for writing. 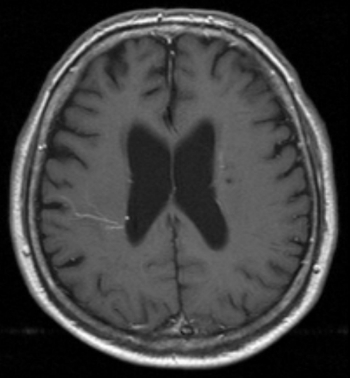 Knowing that the neurologist would be pleased with the results of the MRI, my good mood persisted through the short walk over to the neurologist’s office and into the appointment.
As I expected, he was satisfied with the results. “This is the best MRI you’ve had so far. It looks great. The only changes are for the better.”
He showed me the sites of the brain surgeries. The areas that had infringed on the healthy brain tissue were much smaller. The angioma they’d been monitoring in the right occipital lobe hadn’t changed in size.
At that point, the MRI report arrived electronically. My neurologist read it out loud—it matched up with his own observations. After a couple of paragraphs, the nurse practitioner, Kelly, started saying something, but he interrupted her. “I know the guy, he tends to… I spoke to him just now, he phoned. So I know what he meant in the report.” Though a bit puzzled, I didn’t bother to try to understand what he was saying. He was clearly talking to Kelly.
Then he turned to me. “Well it’s all basically saying that there’s nothing you should worry about. Everything is looking good.”
After he left room, Kelly dithered a bit. “Why don’t you wait while I make you a copy of the report.”
I was delighted. I was curious to see the differences between my first brain MRI, before the brain surgeries, and this one. I perused through it as I sat in my car in the parking lot. There it was, the stuff about how areas from the surgeries had shrunk, and that one in the occipital lobe hadn’t changed in size.
But what was this? I reread it, then again—not only was there evidence of new angiomas, but also, there were signs of a possible bleed from one of them.
Granted, the one that may have bled was small and clearly had not caused any permanent damage, but given those findings, how could the doctor possibly say there was nothing to worry about? How could I possibly not worry? Did he feel that he needed to protect me from bad news?
What else has he hidden from me over the years?