For some reason, come winter, when snow covers the ground, many dog owners forget to pick up after their dogs. Unfortunately, come the thaw, those poops don’t disappear.
While on a walk with my grand-dog, Gus, we came across an entire spectrum of poops, from big to little, brown to yellow, fresh to old. Gus was in heaven. I was not.
Usually, when I walk Gus, we have the odd disagreement here and there. He wants to play with every breathing critter we meet along the way, dogs, cats, people. He doesn’t care whether they want to play with him or not. I do. He wants to sniff at everything and occasionally, he’d like to taste items of dubious nature. I’d rather he stick to the less questionable ones.
Gus is especially interested in other dogs’ poops. I am not. I am very firm in my objections, and he objects to my objections. And come winter, our disagreements tend to cause numerous delays while he pulls on the leash and whines.
Our walk today started out fairly briskly, but he quickly found dead leaves and sticks. Understanding his natural curiosity and deeming the objects that aroused his interest acceptable, I did not object to his investigations. I did however, pull on him when he tried to examine exhausted Coke cans and dead bottles of Sprite. And he listened, moving on at a trot, his tail waving in the breeze.
But then we arrived at the world of poop, streets frequented by many dogs and their forgetful owners. And our disagreements grew in frequency and duration. 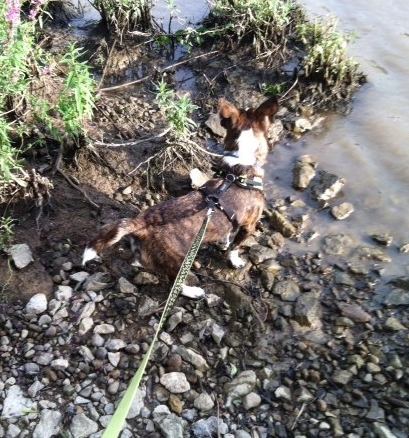 At first, I saw it as part of the package of walking with Gus. I was quite pleased with myself for winning every single argument, and unfortunately became too complacent. I almost stepped in one of the more impressive piles, and, shaken, I almost missed Gus about to make contact with another. I realized that I needed to pay closer attention.

My next mistake was that I focused on the poop rather than on the fact that the high volume of poop was taking a toll on me. It didn’t occur to me that it was possible to suffer from a poop overload. Well, actually, the poop was only indirectly responsibly for my overload and subsequent malaise. The overload was due to the my constant need to monitor Gus and attend to our continual disagreements, while paying close attention to our progress through the mine-field that was our the path.
As the traffic in my neural pathways jammed up, my balance became precarious, and I grew light-headed with vertigo and dizziness. When I first realized what was happening, I vaguely remembered a previous walk with Gus when he’d just discovered rolling in the grass. Though that walk was much shorter, and by the time my balance was affected, I was almost home.
However, shortly after I put two and two together, it was too late, we had a fair distance ahead of us. Still able to think through the thickening fog in my mind, I weighed my options, and decided to phone Daniel and ask him to drive over and pick us up. I reached for my phone, and found that I’d forgotten it at home. I briefly contemplated knocking on someone’s door and asking to use their phone, but by then, I wasn’t capable of working my way through the idea. Though is suspect that even if I had been able to figure it out, I wouldn’t have been able to follow through. The only thought I was able to hold on to was that I have to get home. As soon as possible.

I don’t remember much of our walk home–I marvel that I made it without collapsing midway. I do know that once we were inside, I felt terrible and had trouble figuring out how to take Gus’s leash off. I also know that shortly after we arrived, I somehow made it into bed and conked out for a good couple of hours.

I’m not sure what the moral of the story is. To avoid walks until the spring? To organize a protest against forgetful dog owners?