How many people can say that they learnt a sport from the muppets?
I grew up within a family who were muppet aficionados. My brothers and I, teenagers at the time, used to watch The Muppet Show with my parents, every week without fail. My sister, a little girl at the time, was not as loyal a fan as we were. And when The Muppet Movie came out, we were much more excited than the rest of us.
Impressed by the muppets’ spoon-hanging skills, we had to try it. That evening, at the dinner table, my father, brothers, and I practiced the sport and quickly became adept at it. My sister, her little girl nose too small, was unsuccessful in her attempts, and soon lost interest in it.
Not long after I mastered the art of spoon hanging, my grandfather came to visit. We welcomed him with a festive meal. Proud of my new skill, after I finished my dessert, I placed my spoon on the tip of my nose. I should have know that my stuffy grandfather would not appreciate my prowess, and was quite disgusted with him when he told me off for misbehaving.
I still occasionally practice the art of spoon hanging, and I’m still quite proud of my skill. I’m also proud that I’ve apparently passed my talent on to my daughter, Sarah. 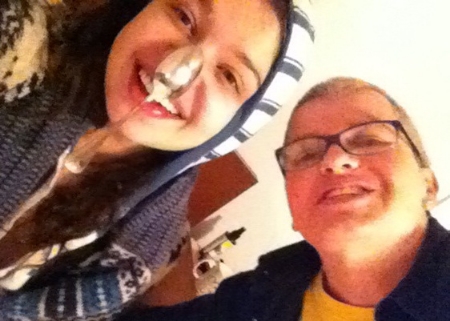 I recently posted photos of Sarah spoon hanging on Facebook, and received some responses that surprised me.

Sigalit wrote: “She’s your copy-paste this one!” Nahshon added: “For a minute there, I was sure its an old picture of you…” and Amir: “The resemblance is stunning.”

Over the years, Sarah and I have often been told how much she looks like me. Our eyes are of the same color and design, and she wears her hair long as mine was, and by the end of the day, her hair looks like rats tails (as my mother phrased it) as mine used. She is also as moody as I used to be, and personality-wise there are many similarities between us.

But her mouth is bigger (in more ways than one), our lips and noses are completely different, and my hair was darker than hers. Also, I used to dress for comfort (and still do), whereas she usually dresses for appearance.
Even when she was a baby and then a toddler, people claimed we looked exactly alike. My parents have pointed at early photos of me. “See, she looks exactly like you.”
But neither Sarah nor I sees it.
People make the same claims about my sister, Rachel, and I. When they do, we look at each other and arch our eyebrows (hers plucked, mine not)—we don’t see it either.
I’m sure many other people, when they’re told how much they resemble one another, react the same way Rachel, Sarah, and I do. I wonder if identical twins also feel the same way.