My name is etched on the front of my dog tag, and on the back it says:
BRAIN HEMORRHAGE
EPILEPSY
NO BLOOD THINNERS 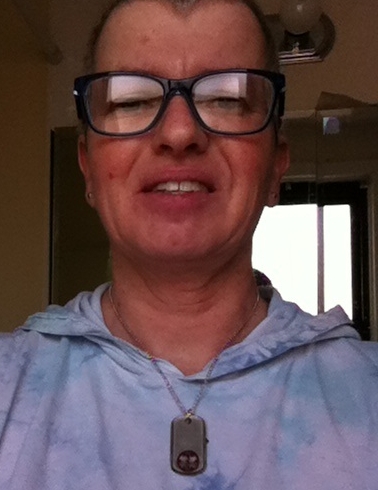 Me
It dangles from a heavy-duty silver chain, which I wear around my neck. Since I first got it, after the brain surgeries, I have been reluctant to take it off. I have only done so when there’s been absolutely no choice, during brain MRIs or CT scans. I worry that I’ll lose it, or forget to put it back on. But mostly, I feel naked without it.
Earlier this week, Sarah, my daughter dropped off her dog, Gus.
I was puzzled when Sarah carried Gus into the house–the street was clear of snow and salt. “Where’s his collar?”
“He was getting a rash from it.” and no wonder. Last time I saw him, his collar was filthy from a trip to her boyfriend’s farm.
Gus will be staying with me for a couple of weeks while Sarah’s landlady recovers from the discovery that he has been living in one of her pet-free rental houses. By his second day here, he seemed to have recovered to a large extent from his separation anxiety–we spoil him. He is never left home alone, whereas Sarah has to leave him for hours at a time while she’s at work. Whenever he wants to play, someone is right there, ready to throw him a ball, when he’s tired, there’s always someone he can snuggle up to. Also, I often take him for long walks, which he loves.
But this time, showing my normally suppressed paranoid streak, I was apprehensive about letting him venture beyond our fenced-in backyard, and even then, he was never alone. He is an escape artist, but more importantly—Sarah lost his rabies-tag a while back and had yet to replace it. 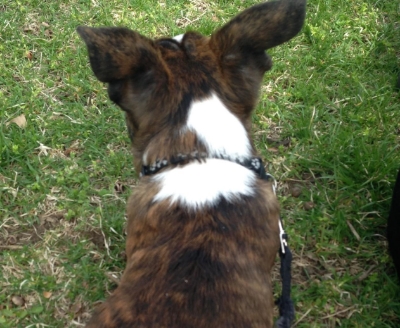 Finally today, several days since Gus arrived, a replacement rabies tag arrived in the mail. I attached it to his collar, black with silver skull and cross bones. (My choice.) When I held it out to him, he came running over and, tail wagging and tongue lolling, he jumped up. Paws resting on my lap, he let me place the collar around his neck. Once I closed it around his neck, he jumped onto my lap and licked my face. Then he jumped back down and, tag jingling, ran off to play.
Do dogs feel naked without their collars?