I returned home from my latest trip to Israel just over a month ago. I came away with a goofy smile on the inside, and whenever I spoke about my visit, that same smile showed on the outside as well. But I didn’t fully understand what had happened.
I knew that my first trip to Israel since the bloody brain, gave me back the home I thought I had lost three decades ago when I left Israel to come to the U.S.. After I returned from that trip, it took me a good few months and a lot of writing and talking to friends to fully grasp and verbalize that Israel was my home.
Before I left for Israel this time, my second visit since the bloody brain, I knew that my focus would be on revisiting my past, a past that for many years I thought I had left behind me.
In my search for who I’ve become since the bloody brain, I realized that I needed to find a frame of reference, and I understood that the key lay in my past. Upon my return from the U.S., I felt as if there was more to the trip, that something inside me had shifted, that I had found something significant.
Unable to fully comprehend the nature of that something and its significance, I spent this past month thinking back to my visit, exploring my emotions. And this morning, as I communicated with my sister via What’sApp, it finally clicked. 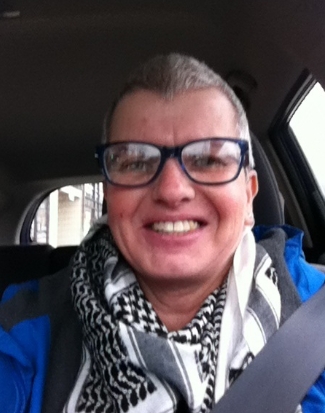 Me, as I am, now.
My first trip gave me back my home. My second, gave me back myself.
For many years, I had not allowed myself to be the true me. I had hidden behind a thick wall, a wall that kept me from being who I am.
During another recent epiphany, I understood that I built that wall in order to protect myself while I healed from pain. Just before I left for the U.S., I went through an unpleasant divorce. No divorce is pleasant, but given the lack of separation between state and religion in Israel, the divorce proceedings had to go through the rabbinical court, which added significantly to the pain. It became unbearable.
Within days after the divorce was finalized, I left the country. I needed to leave it and my past behind me. And I built that wall.
Through the thirty years since then, the nature of wall evolved. It grew cracks and gaps in places, in others I fortified it. Since the bloody brain, becoming more aware and self-aware, I came recognize that wall for what it was, and started chipping away at it. It didn’t take long before the rate at which it was falling increased as I became more and more authentic, true to myself.
And now, this latest trip to Israel, brought it crashing down. Now, I am left digesting, searching through the rubble, exploring. And as I discover who I am, my internal smile resurfaces, again and again.
I like myself as I am now, more than I liked myself prior to the bloody brain. I am more content than I’ve been in decades, certainly since I remember myself.