I wrote about the bloody brain wreaking havoc on my life.
I speak of the onset of bloody brain, and I say “since the bloody brain.”
Recently, within days of returning from a visit to Israel, I told Judy, “If it weren’t for the bloody brain I would go back tomorrow.”
I think of the bloody brain having betrayed me and my body. On the other hand, I also think of it with affection. I smile when I recall some of the funnier consequences of my poor short term memory or of my trouble processing input. In retrospect, I can laugh at the meltdowns I’ve experienced when I’ve been overwhelmed by high volumes of sensory input.
Though the bloody brain is very much a part of me and my life, I think of it as a separate entity. I first named it The Bloody Brain shortly after the brain bleeds. Back then, I grasped at anything that made my nightmarish situation tolerable, and humor was one of few resources I had at hand.
At some level, though more so in the past, guilt played a role in my recovery. Whenever the possibility of my children inheriting the disease came up, I felt guilty, even though I knew it didn’t make sense. And when my younger sister was diagnosed with cavernous angiomas, I felt responsible. Perhaps personifying the bloody brain helped me manage the guilt by allowing me to assign blame to another being. 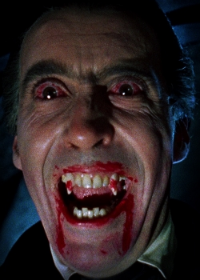 Now that the rough patches are much fewer and farther between, referring to it as the bloody brain is more of a habit than anything else. Though the humorous side of the name continues to play a significant role in my life, especially on bad brain days.