“What do you want to be when you grow up?”
My son, wanting to follow in his parents’ footsteps, dreamed of being a mathematician. I believe it was my cousin who wanted to be a garbage man. Several of my friends aspired to become policemen. Other common answers were, “a teacher,” “a nurse,” and “an engineer” (meaning a train engineer).
Andre was adamant, “a horsey.” He stuck with that answer in spite of his father’s insistence that it wasn’t possible to grow up to become an animal.
I was more practical. Not only did I have no aspirations to be an animal when I grew up, but I had lined a both first and second choices, just to play it safe. My first choice was to be a pirate, a boy-pirate, like Blackbeard. Of course, I had no intention of growing a beard like him–that would have been ridiculous. Modeling my career in the style of Long John Silver of “Treasure Island” also seemed like a viable option.
Realizing at some level that perhaps my hopes of becoming a boy-pirate might not work out, I knew that I should have a back-up plan. It didn’t even occur to me to consider becoming a girl-pirate as an alternate plan. Instead, my second choice was to be a gypsy like Esmeralda of “The Hunchback of Notre-Dame.” 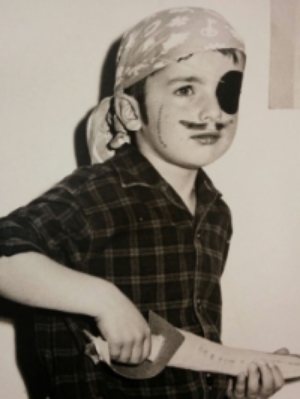 My younger brother, Simon.
Several of my high school friends assumed that I got only one of my ears pierced because I chickened out of getting my second ear done. But in fact, I stopped at one ear because my childhood dreams of living my life as the scourge of the seven seas still captured my imagination.
My dreams of piracy recently resurfaced when I saw a photo of my brother dressed up as a pirate. I couldn’t remember whether I had ever donned a pirate’s costume. Hoping to find a photo of myself with an eye-patch and a cutlass, I searched through collections of family photos. Though I didn’t find any such picture of myself, I found evidence that my dreams grew out of an honest-to-goodness family legacy. 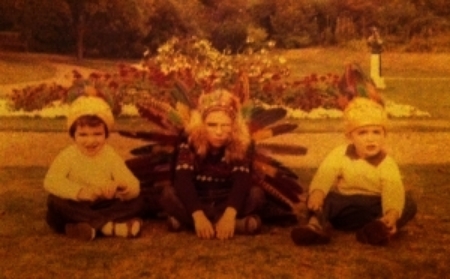 My brothers and I–pirates in disguise (notice Jonathan’s eye patch).