“Dvorah?!”
I turned to identify the source of the questioning exclamation. I immediately recognized the face attached to the unfamiliar voice—Ze’ev.
Deep down inside, I didn’t feel the need to confirm his identity, but a niggling voice in my mind did. I searched the crowd milling about us to place him within a familiar context, though I knew I would be unsuccessful—we were in the middle of a crowded terminal, surrounded by strangers. 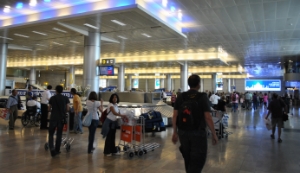 Shifting my focus, I searched his face for validation, and found it in his smile and the way his lips moved as he formed words—evidence my mind could not refute. All doubts disappeared—this was the Ze’ev I knew thirty plus years ago, as a classmate in high school.

We’d recently reconnected via Facebook. Despite only brief exchanges, I quickly learned that he’d retained the sense of humor I’d enjoyed when we were younger. I found myself pleased whenever he commented on my posts, as if we were long lost friends, good friends from the past. But we’d run with different crowds in high school.

I learned he was no longer the class clown, who had little interest in his studies. He was now a bona fide adult, with an MBA from the Technion, the Israel Institute of Technology, and a job title which included several acronyms. I became curious about the person he had grown into and the evolution he’d undergone to get there from who he used to be.

When I saw him at the airport, I had so much to say, so many questions, yet I had no idea where to begin. “What are you doing here?”
As soon as I heard the words come out of my mouth, I regretted them. I’d wasted a question, and precious seconds. We had so little time, a minute, maybe two. We were at the airport, he’d clearly come to meet someone, and I’d just arrived to visit family and friends.
Why did talking to him seem so important?
Since my brain surgeries, I’ve been on a quest to understand the new person I had become. And over the last few years, I’ve been exploring my past, hoping that it would help me on my quest.
This trip was very much about reconnecting with old friends—I’m seeing my first husband, Amir, this evening, and on Saturday, I’m meeting a group of friends from elementary school.
Was my reaction to Ze’ev’s appearance at the airport due merely to idle curiosity? Or was it a part of something bigger, my search for my self?