It all started with an innocent question. “Do you have WhatsApp?”
Rachel, my younger sister, on the phone with me, responded in the affirmative, and that was the beginning of the end. WhatsApp, is a phone app that allows you to message people across the globe. Most of my immediate family live in Israel, my parents, my younger siblings, Simon and Rachel and their families. My older brother, Jonathan, and his family live in the U.S. like me.
After Rachel and I got in touch via the app, she set up a WhatsApp group for the family named “Brandonims.” My siblings and I spent the next couple of hours on our smart phones, texts flying back and forth, to and from Israel. First just words, then photos, voice recordings, and videos.
Since then, we’ve been messaging each other on a regular basis. Israel is seven hours ahead, so the Israeli contingency start around 3:00 AM which is mid morning to them, and those of us in the American contingency go into the evening, which to them is the middle of the night. I’ve learnt to put my phone on vibrate or turn it off altogether at night. 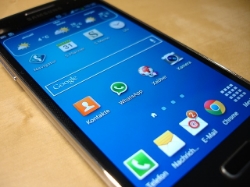 It’s nice to see current photos, hear familiar voices I have missed. But best of all are the rapid fire exchanges between all of us siblings, conversations that until now were restricted to those rare times when we were all in the same geographic location. Yes, we’ve enjoyed the odd one-on-one banter, but it pales compared to our three or four way conversations. Very much on the same wavelength, the wry remarks bounce back and forth within seconds of each other.

A conversation about Jonathan’s willingness to eat vegetarian food in a non-kosher restaurant, evolved through non-kosher calamari, into an exchange about a brith Rachel attended. “I was actually in a brith yesterday and the father was told to keep it…”

I was dumbfounded. “To do what with it?”

It deteriorated rapidly from there. “Perhaps it’ll be returned to the kid as a wedding gift.”

I asked about the rabbi. “Reform, conservative?”

“Orthodox. The rabbi, not the…”

Over the last few days, I’ve found myself laughing so hard, I’ve been close to tears.

No matter the geographic distance between us, we’re a close family. I’ve missed our banter. I’ve missed my family.