On Novmber 2nd, I sent a message to Sefi via Facebook: “I’ll be in Israel December 19 through 28.”
He responded with: “I will start arranging something. In Israeli terms this is not a short notice.”
Way back when, towards the end of March, I got a notification on Facebook that it was Sefi’s birthday. Sefi and I were classmates in elementary school, Zichron Yosef, from first through sixth grade. Earlier this year, we reconnected through Facebook.
In response to my birthday wishes, he messaged me, promising to organize a class reunion on my next visit to Israel. Three weeks later, after I notified Sefi of my time constraints, he started the ball rolling together with another classmate, Anat, who created a group on WhatsApp for the reunion. (WhatsApp is a phone app that facilitates across the globe.)
The next day all hell broke loose—the cat herd from Zichron Yosef arrived, one by one. Using all the resources she had at hand, family, friends, friends of friends, acquaintances, Anat tracked people down, via email, cell phone numbers, text messages, and WhatsApp. 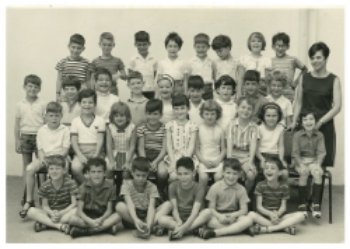 First grade.
My phone dinged and vibrated through the day and the next, some during the day, others into the night (Israel is seven hours ahead of Pittsburgh time). Most of the messages were notifications of new arrivals, until the clowns showed up on the scene, Nahshon, Geri, Avishay, when the banter started.
“I remember getting together on Friday evening and dancing “Boy Takes Girl” and something about a goat.”
“Has anyone located Gil yet?”
“I found Gadi. He was enthusiatic.”
“Sefi is a self-made man: from an alternate on our soccer team to head of the committee.”
“Gadi doesn’t have WhatApp.”
“Sefi, I don’t remember whether I was on the team, but if so, I would happily switch places with you.”
“Nahshon, I rally appreciate it. I still have a complex from that whole thing…”
“Gadi will get WhatsApp even if it means buying a new phone.”
“Has anyone heard from Rafi? Is he in the country?”
“Who’s Rafi?”
“The guy with the orthopedic glasses. Miki is still traumatized by them.”
The escalating excitement was almost palpable.
I’ve never been much for reunions, but somehow, this was different. Possibly because I anticipated more of a personal experience, less of a potential cause for sensory overload. The bloody brain has sent me on a journey to explore my pas and reconnect with old friends. Perhaps it’s also a matter of aging, a mid-life phenomenon. Whatever the reason, the excitement on WhatsApp was contagious.
As Anat focused on finding more classmates, Sefi worked on trying to reach a consensus about the time and place. Four couldn’t manage Saturday the 20th, three were unhappy about the evening, they preferred afternoon.
Should it be held in Haifa, our hometown? Or in Tel Aviv? Or somewhere in between? Should it be at a restaurant or a pub? What about someone’s house? Those who offered their houses lived too far away, until Orly was located—she offered to host us, but she could only manage Thursday, the 25th. Again, several couldn’t make it.
“What about the 27th of December?” 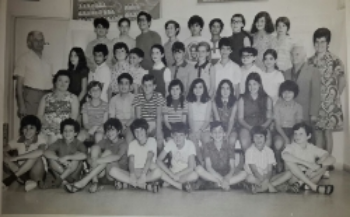 The responses came in rapid-fire one after the other after the other.
“I can make it.”
“Works for me.”
“I’ll be there.”
“Me too.”
And that was it. We were set. Sefi and Anat had managed to herd the cats.
Now, we just need to agree on a place.