Someone uploaded a photo of three high school kids. It’s clearly from a school trip. I recognized myself. I looked lost. I remembered David. But there between David and me, his arms around us was someone whose face I only knew that I should remember. 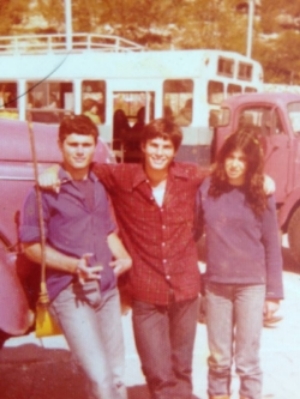 David, Uri, and myself.
The tag said “Uri D’Angeli R.I.P.” I searched through my mental files, again and again, but he was nowhere to be found. It wasn’t a matter of needing to deepen or broaden the search. The memory just wasn’t there, anywhere.
I searched for clues, just in case something would jog my memory. I pored over our official high school photo, where we were all tagged–his photo raised no memories whatsoever. But he had his arm around me–my memory of him should have been more tangible.
One comment said, “How Uri stayed young and beautiful… sad.”
The next was, “Wow, my heart skipped a beat.”
And I asked, “What happened to him?”
The response was, “Killed during the 1st Lebanon War, 1982…”
I was still in Israel back then. I must have known. But the memory was not there. Instead there was a gap, filled with… nothing. I could feel it. And even now that I knew what belongs in that gap, it wouldn’t click into place. It wasn’t a memory. It was more like a story, about someone who felt like a stranger to me.
I remembered Sefi Donner and Anat Freund. I recognized Avishy, Nahshon, and Yossi. And that kid in the photo was Michal, and that one was Tomer. Looking through photos from elementary school, I remembered a lot of the faces and could put names to most of them.
But when I looked at photos from high school, I recognized only a few faces, and fewer names. I thought back to my time in the army, and names eluded me. And my memories of incidents and anecdotes from those times are few and far between. The same went for my time in college. There was so much missing from that era, 1973—1984. Then it picked up again, graduate school, postdoctoral positions at University of Minnesota, then Virginia Tech.
My first thought was that the gaps in my memory had something to do with hormones, puberty. But I now recalled that before the bloody brain, there were chunks missing, but they were much smaller.
During one of my appointments with my neuro-psychologist, I mentioned that I was having to relearn the multiplication tables. “But that’s long term memory. That’s interesting.”
I still have trouble with 8 times 4. It feels as if I’ve been told that 8 times 4 is 32, but that square in the table is blank. I can convince myself 32 correct. I know it’s between 7 times 4, which is 28, and 9 times 4, which is 36. But that’s as far as I get. I have to verify it somehow, with a calculator, by asking someone, or by subtracting 4 from 36. The memory is not there to be found.
I believe that before the brain bleeds, I would have remembered Uri, especially with all the clues, the photos, his last name, and the fact that he was killed during the 1982 War. But now, like 4 times 8, his memory just isn’t there.
But I can feel the gap where it belongs.