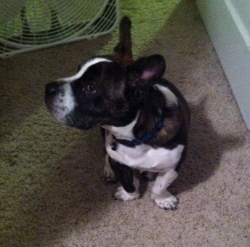 Joyce was watching Gus in the fenced in back yard. “Poor little guy. With those paws of his, he can’t really dig.”
A couple of days later, he made a liar out of her.
Gus is a mutt. The vet thinks he has some basset hound and pit-bull in him. He certainly has the coloring and face of a pit-bull, and the front paws of a basset. But his size… well, he’s smaller than either.
He wasn’t even three months old when I first met him. I was visiting my daughter, Sarah, in Ohio. To keep him busy while we ate lunch, she gave him an elongated piece of rawhide. Tail wagging, he took it in his mouth, gave us sidelong glance, and head held high, trotted over to a patch of ornamental grass. He dropped it, nudged it into the middle with his nose, gave us another glance, and nonchalantly trotted back towards us.
A month later, he came to visit me in Pittsburgh. When I gave him a stick of beef jerky, carrying it in his mouth, he gave me that same sidelong look, jumped onto the sofa, and carefully nudged it under a blanket.
At our next encounter, he elevated his hiding technique to another level. He now understood that hiding his treats in the backyard was preferable to hiding them in the house, and that rather than merely nudging them into the shrubbery, he nudged some dirt on top.
He had not yet discovered the art of digging.
Finally, at eight months old, he knew enough to try to dig, but his prissy paws got in the way. My friend Joyce was convinced that he just didn’t have it in him. But a couple of days later, much to his delight, he discovered the joys of digging. 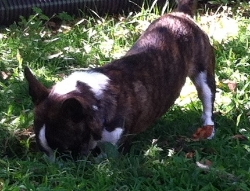 I was sitting outside with him, my nose buried in a book until I thought to investigate the snuffling sounds that were coming from behind me. There he was, his nose stuck in a fast deepening hole, his tail like a veritable propeller. He was so excited, he couldn’t contain himself. His nose covered in mud, he took off running around the yard a few times before he could settle back into digging his way to China. He spent a good half hour alternating between digging and pattern running.
The next phase in Gus’s digging odyssey came when he realized that digging was not only a fun and exciting pastime in its own right, but it could also serve a purpose.
Sarah took him to a friend who owned a dog, an Australian shepherd named Blue. While Sarah socialized with her friend inside the house, the two dogs raced around the fenced in back yard, yelping and barking with abandon.
After a while, the humans became aware of  an unnatural silence outside. Drawn out to the yard to investigate, they found Blue digging for all he was worth by the fence. But Gus was nowhere to be seen in the backyard. Sarah’s heart plummeted. This wasn’t the first time Gus had escaped. But how? This fence was sturdy. He couldn’t have wriggled under it.
Scanning the fence for weak spots, Sarah happened to look past Blue into the neighbor’s yard.
Smaller than Blue, Gus had already dug his way out. He was on the other side of the fence, sitting down, tail wagging, tongue lolling, waiting for his new friend to enlarge the hole and join him.
Did I mention that Gus is an escape artist?
He’s not an alpha dog in any sense of the word, but there’s something about him. Perhaps he’s a quiet leader, or maybe he just wants to play. He’s smart, strong, and fast. And a skilled digger.
Whatever he is, he’s a small dog with a big personality.