When did it start? Did I first sense it as we ambled through the shaded courtyard, or was it an abrupt shift when we stepped into the sunshine? 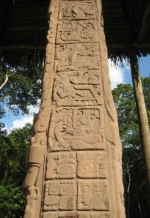 Perhaps it first nudged my consciousness when I touched the first carved pillar along our path. My fingers splayed, my palms rested on the stone, absorbing the warmth it radiated. Was it radiating anything other than heat?
The vague awareness was certainly there during the long trek along the grass malls.
Whatever it was, it defied description. It just was, all around me.
It came from the trees that lined the mall, from the wide expanses of lush green grass and the infinite blue skies. The intricately carved pillars that dotted the lawns and the tall stone steps we had to climb were also a part of it. It was imbued in the air I breathed, in the sunlight touching my bare skin.
Neither the background chatter from Debbie and Sara nor the intermittent sound of birds chirping could penetrate it. Tere, quietly lagging behind them with me, also seemed to sense it, a silent presence. 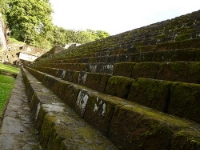 And then we arrived, to a moment in time, frozen forever.
Carved monoliths surrounded the ruins of an empty plaza, guardians of a lost civilization, forever waiting, watching those entering the empty plaza.
I stood in the middle of the stone lined plaza, soaking in the tranquility around me, listening to the hushed memories. The warm stones murmured of thousands of feet criss-crossing the square long ago. The light breeze echoed hushed chatter and laughter of bygone days.
The endless silence around me, in the trees and the grass, the sunbathed rocks, and from within me, spoke of the forgotten city of Quirigua.