The house had a central core, the stairwell to the basement. The rest of the house was built around it. Theoretically, it was possible to walk around the house on the inside in a complete circle, except that I just couldn’t manage it. I had no trouble navigating between the kitchen, dining room, and living room: they had interconnecting doorways. If I found one, I found the others. But finding the bathroom or the stairwell was always a bit of an adventure; the only way to access them, was through two short hallways, and once those inner hallways were involved, I was in trouble.
Cindy found my difficulties amusing, but Georgie was puzzled by them.
I’m sure that most visitors figured it out fairly quickly. But for a brain damaged person like me, who has trouble navigating in general, it was hopeless.
In inpatient rehabs, within days of the first two brain surgeries, my occupational therapist, Abby, worked with me on my navigational skills. She took me from rehab to the main entrance to the hospital, then guided me back to the rehab center, retracing our steps. She did so a couple more times, following the exact same route each time. On the fourth time, when we arrived at the entrance, she asked me to lead the way back to rehab. I couldn’t. She tried giving me hints.
“Did we use the elevators?”
I had no idea.
“Do you recognize this stairwell?”
I shook my head.
During my week in rehab, we tried it two more times. By the third time, I recognized the hallway connecting rehab to the main hospital building, I knew we had taken the elevator, and I was pretty sure that the rehab center was on the second floor. Or was it the third?
Since then, my navigational skills have improved dramatically, but I still get lost fairly frequently. Directions are of no help. I cannot follow more than a couple of steps without becoming completely confused. When I’m driving, I rely on my GPS quite heavily.
I was visiting Cindy in Colorado, staying at her house, sleeping in her room in the basement. During my visit, I had no trouble reaching the inner hallways from the kitchen, living room, or dining room. But once there, finding the bathroom and the stairwell was a matter of pure luck. I’d wander around the inner hallways, rounding corners from one to the next, occasionally reteracing my steps several times, until I recognized my goal. There was no method involved.
Sometimes I found my way on my first try, sometimes…not.
On my third day there, I needed to fetch something from the basement. I happened to be in the living room. Within a few steps I was standing in one of the hallways, and then, as usual, I started roaming, keeping my eye open for the stairwell. I wandered around, back and forth, a few times before I recognized the door to the stairwell.
As I approached the open doorway, Sweet Goergia Brown, or Georgie for short, one of Cindy’s basset hounds, rounded the corner from the opposite direction and stood there staring at me, her head cocked, as if confused by my behavior, possibly questioning my sanity.
I chuckled. “Okay, so I’m not always brilliant.” I shrugged. “I did find it in the end.”
She continued to watch me as I turned into the stairwell.
Before I was ready to make my way upstairs, I used the bathroom, and when I came out, Georgie was waiting for me. As soon as she caught sight of me, she wagged her tail, then turned deliberately towards the stairs, and waited, looking back at me. When I showed signs of joining her, she wagged her tail harder, and as I followed her up the stairs, her tail was doing a fair imitation of a propeller.
Once she delivered me safely upstairs to the living room, she disappeared. She’d done her job.
Several times during the rest of my stay, I caught her looking at me with her head cocked. Was she keeping tabs on me, wondering whether I needed further assistance? 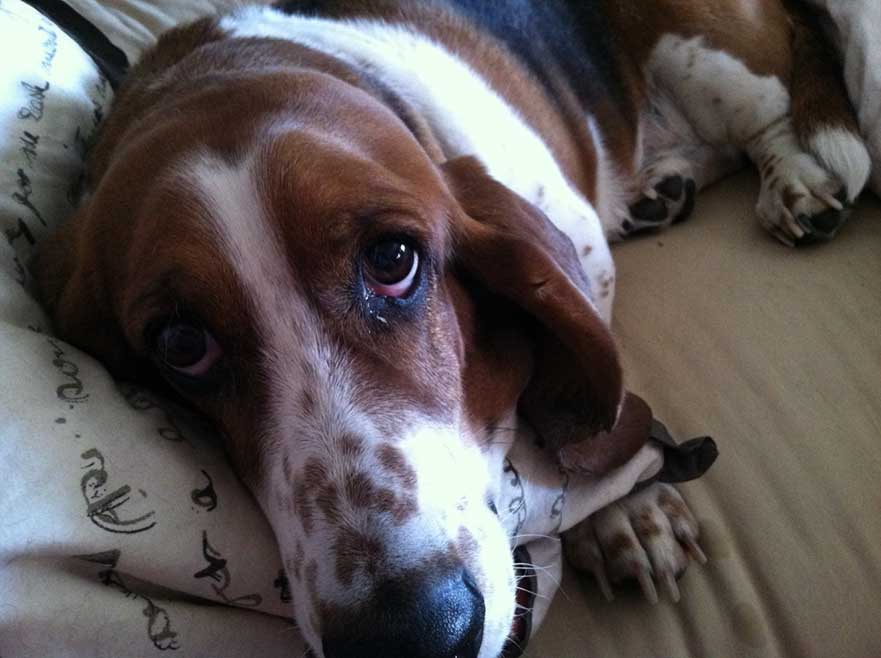