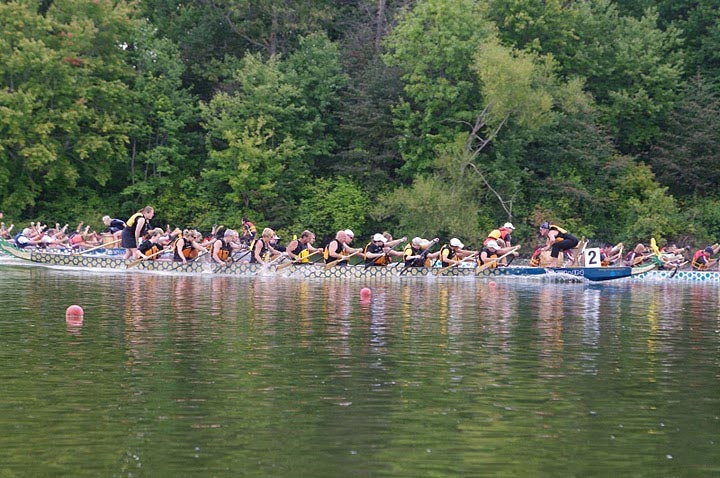 “They’re walking on us!”
I pulled my paddle blade through the water with more power.
“It is your decision. Do you want this? You have to decide now!” I’d never heard Coach Lynne sound so intense.
I didn’t think I had anymore to give. But I did: more power, more focus. As I slammed my paddle into the water and pulled, I felt the boat surge forward. All twenty of us as one were pulling harder-we had made our decision.
“They’re still walking on us!”
I still had more, and gave it, every ounce I had. Each stroke powerful, harder leg-drive, faster rotation, sharper sit-up, stronger catch. 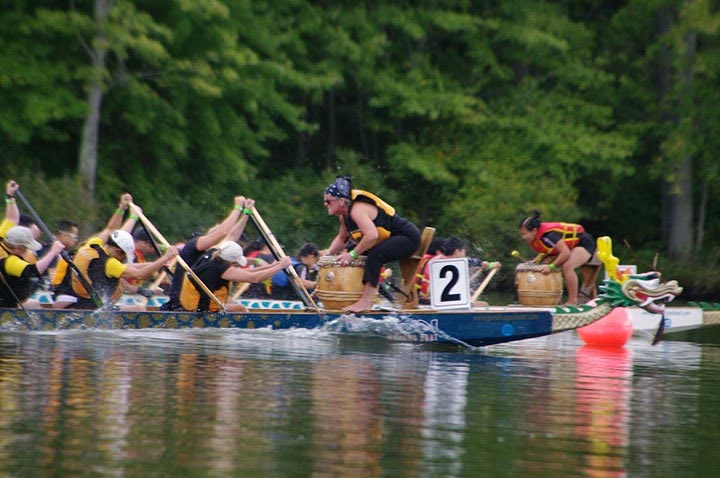 Lynne knew exactly how to maintain our focus. “Rotate! For one, two, three, four… six… eight… ten! Now drive for two… four… six… eight… ten. Sit up for two… four… six… eight… ten. Now put it all together! Everyone together, everyone on stroke! We are one!”
We were one. Our paddles slamming into the water as one, pulling through the water as one, flicking through the air as one. A machine, each of us a piston, all the pistons pumping as one. Biceps, triceps, quadriceps contracting, relaxing, contracting as one.
“Push! Push! This is yours if you want it!”
We wanted it.
“Rocket! Now engine room! C’mon Elaine. C’mon Jerry. And stroke! Now everyone, together, finish! Finish!”
I still had more! I strained, I pushed, more and more power, rotating hard, driving hard, sitting up hard. Power, power, and more power.
“C’mon! You’ve got this!”
“And… let it run!”
I pulled my paddle across my lap, my head bowed down, shoulders slumped, breathing heavily, utterly spent.
Lynne’s voice rang out again. “Cheer for them.”
I became conscious of the world outside our boat as raised my head to seek “them.” Did we win? We were gliding beyond the finish line ahead of the other boats, but it could have been a neck and neck finish.
“Hip, hip, hooray!” We drummed twice on the gunwale then raised our paddles in time with the cheer.
“Hip, hip, hooray!” Again, then once more.
My movements were feeble; I raised my paddle half way. I had no breath to join in on the cheer. Lynne’s voice was the only one that rang out.
The steersman called, “Paddles up!”
I didn’t know if I’d be able to lift my paddle up, let alone pull it through the water. But there’s always that little bit left to squeeze out of somewhere.
“Paddle easy, go!”
And paddle easy we did, the Steel City Dragons, operating on fumes.
Lynne made one more demand: “Paddle pretty! They’re watching you.”
Discovering hidden wisps of reserves, we paddled pretty–heads up, backs straight as we sat up, rotating and reaching as far as we could, each stroke on stroke, paddles into the water together, out together–all the way back to the docks, the residual adrenaline flowing through our systems preventing us from collapsing.